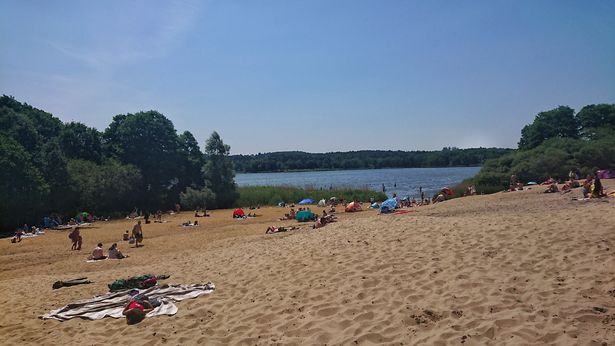 Looking for a sunny getaway, but can’t afford the flight? There are plenty of stunning beaches within two hours of London, so grab your flip flops and sunnies for a day trip to one of these beauties.

Believe it or not, the closest beach to London is actually on the Piccadilly Line! In Ruislip, West London, a 700-acre woodland nature reserve is home to a gorgeous natural lake, with a genuine sandy beach. Woodland trails, a miniature train, and pirate ship for kids are also on offer. Nearest stations are Ruislip and Northwood Hills, Zone 6.

Another unlikely landlocked beach near London, this sandy spot faces onto Frensham Pond in the midst of a large common near Farnham. The water quality here is rated excellent, and you’re allowed to swim; there’s also a brilliant and bizarre sculpture park with 600 statues to explore within walking distance. It’s also one of the best wild swimming spots around London. Approximately one and three-quarter hours from London (train from Waterloo to Farnham, then a 19 bus to St. Mary’s School and walk. Or for taxis and drivers, bang GU10 2QB into the satnav).

Wonderful Whitstable is famous for seafood, but the beaches aren’t to be missed either. Within Whitstable itself, West Beach is a lovely spot for a wander, whilst Tankerton Beach, a little further east, offers unspoiled views of the sea and sky. Top it off with fresh seafood, and you’ve got a picture perfect day out. Approximately one and a half hours from London (train from St Pancras/Cannon Street/Victoria to Whitstable).

Regarded as one of the best beaches in the country for building sandcastles, you’d better pack your bucket and spade for this one. The clue’s in the name: it’s sandy, which makes it a bustling place in summer. Sadly though, your four-legged friend won’t be coming along, because dogs are banned from May to October. At least you can hang out with the mermaid statue as a consolation prize. Approximately one hour from London (train from St Pancras to Folkestone Central).

A good spot for watersports, is Minnis Bay. Whether you try you hand at windsurfing, or a more sedate session of sailing, Minnis Bay will keep you entertained. A massive expanse of beach will disappear at high tide, but until then, you’ve have time enough for fun in the sun. Approximately one and a half hours from London (train from St Pancras/Cannon Street/Victoria to Birchington-on-Sea).

Send us a message